Caring For Our Planet

The building and construction industry creates more than a third of the world’s carbon emissions. While we’ve been working to reduce our impact on the environment since 2010, this year, we are developing a comprehensive emissions reduction strategy. Across our business, we’re asking teams to continuously improve by reducing carbon emissions. The virtual design and construction  (VDC) team has been instrumental in making that happen. With the use of building information modelling (BIM), we’ve been able to achieve significant reductions in the amount of carbon being emitted on jobsites. With each ton of carbon we prevent from entering the atmosphere, we’re working towards a net-zero future.

The VDC team uses BIM technology to build entire structures in the virtual world. This has a number of benefits, such as identifying issues early—when they’re less costly to address. While this is great for clients, the ability to reduce physical trips to the site as well as the amount of time equipment is running during construction has a big impact on carbon emissions. Quantifying that isn’t easy, but we have some numbers to share. 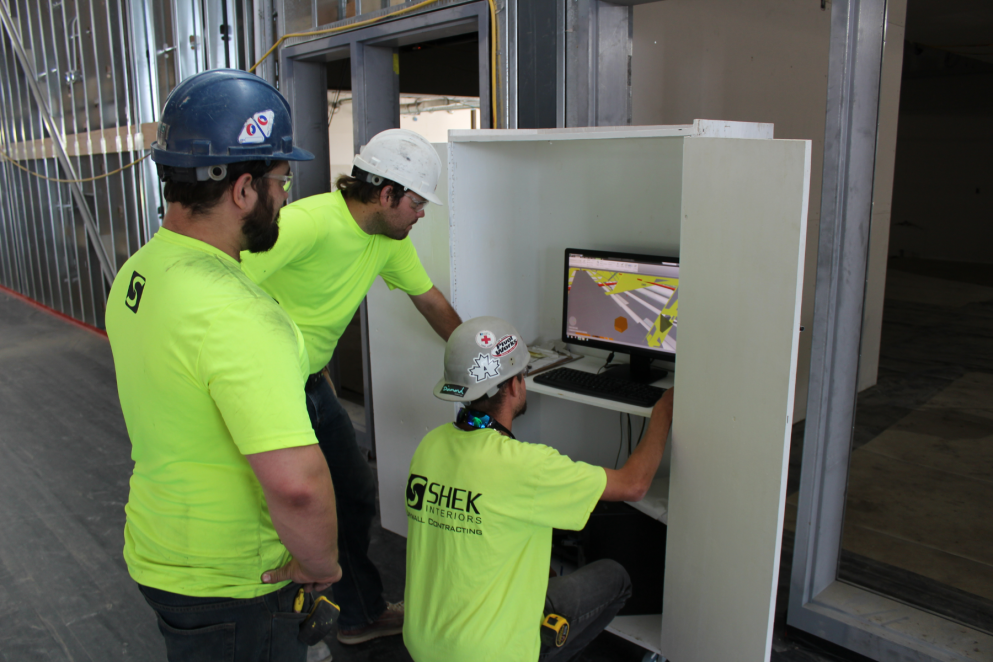 On a recent job for Norquest College, the project team had to reuse the existing high-velocity ducts on each floor. This raised a couple of challenges because the teams had to install new duct work, sprinkler lines, light fixtures, and cable trays around the original unknown ducting.

Enter the VDC team. They created an exact replica of the facility and the elements that were to remain at each level of the building. They then modelled the new elements to ensure that construction went as smoothly as possible. Many of the new elements were fabricated at an offsite warehouse, reducing the amount of time that trades were driving to site.

Thanks to the VDC team, more than 840 hours of scissor lift time and 160 travel days were eliminated from the Norquest College project, significantly reducing emissions, and resulting in a total of 2,300 kg of carbon not being expelled into the atmosphere.

“We’ve saved hundreds of thousands of dollars by modelling projects virtually before construction begins,” says Vincent Plourd, director of VDC. “But we’re reducing carbon at the same time, which is more important in the long term.”

On another project, this time for Freedom Cannabis, the VDC team worked closely with the steel supplier, celling panel installer, HVAC contractor, and plumbing contractors to model the elements in the exact position that they were going to be installed. The teams were able to eliminate 54 days of scissor-lift time, 22 days of welding-machine time, and two days using a picker truck. The result? An estimated 950 kg of carbon kept out of the atmosphere.

“Overall, using VDC and BIM minimized the number of workers on site, optimized the construction schedule, saved materials and rework, and significantly reduced the use of electric and gas-powered equipment,” says Plourd.

St. Joseph School was another successful carbon reduction project. BIM was a priority for all stakeholders, and we worked closely with the steel supplier and installer to make the process of installing the structural steel as lean as possible. With the help of virtual reality, we saved 300 hours on telescopic boom-lifts and 100 hours of run time on cranes. This accounted for reduced carbon output of 2,040 kg.

Significant reductions in the amount of carbon being emitted on our jobsites will continue to be a focus for Chandos moving forward. As we look to complete our comprehensive emissions strategy, the statistics on these three projects allows insight into how technology will pave the future for less emissions. With a total of 5,290 kg of saved carbon output, it’s clear that these small adjustments make a big difference for our partners, clients, and owners. We are committed to continuing to use innovation and technology to reduce our impact on the planet.