The Point Public House project was a complete renovation to an existing neighborhood pub, The Point and Feather. A community staple in Calgary for over 30 years featuring food, drink, sports, darts, table games, and video lottery terminals. The Point and Feather catered to all ages in the surrounding communities with a consistent regular clientele.

This was the sixth project by Chandos for the TMAC group who operate multiple establishments around the City of Calgary. The scope included reconfiguring existing underground plumbing, and a complete re-design of the pub space. Following demolition, it became apparent that structural modifications would be necessary to incorporate the new design with the existing base building. New steel beams needed to be engineered, procured, and installed in a short period. In conjunction with the pub renovation, the landlord was also undertaking a complete reface of the existing base building using their own general contractor. Base building work overlapped with tenant fit-out work in multiple locations and substantial coordination between the two general contractors was necessary. 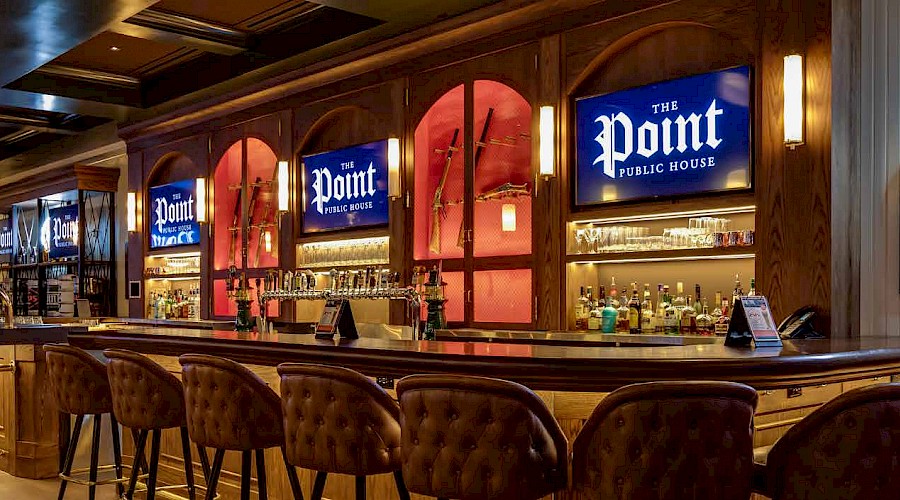 The project team encountered design issues due in part to existing base building conditions. With no time to issue new drawings and details, Chandos worked side-by-side with the owner on site every day to redesign elements on the fly. The Chandos production system alleviated the schedule impact of multiple changes being made weekly. The initial schedule of 11 weeks was extended to 13 weeks but could have easily been more than 15 weeks had it not been for the efforts of everyone on the construction team.